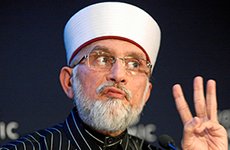 WEMBLEY ARENA hosts a Peace for Humanity conference on Saturday, with 12,000 British muslims set to attend and support a declaration of “absolute condemnation of terrorism”.

Pakistani cleric Dr Muhammad Tahir-ul-Qadri is the lead speaker at the event and says he and his group, Minhaj-ul-Qaran International, “want to give the message to the whole of the Muslim world and the youths who have been brainwashed that this is Islam and what it stands for: peace, harmony, tolerance, moderation and love and compassion for humanity.”

Near the 10th anniversary of the 9/11 attacks, the idea is to show the world what the organisers see as the true face of their religion, as opposed to daft stereotypes of bomb-wielding terrorists.

Tahir-ul-Qadri’s declaration is set to be signed by leaders of other religions, such as the Archbishop of Canterbury, as well as Prime Minister David Cameron and other politicians.

Explaining his views, Tahir-ul-Qadri said: “Extremists and terrorists have mixed up religion with international and political issues.

“My struggle is to differentiate between the issues – to take the political issues as a totally separate agenda that has no link with suicide bombing and these crazy activities.”

London Olympics: Hundreds of Thousands of Extra Tickets to Go on...