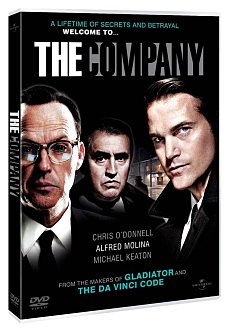 Released: 10th December 2007
Adapted from the best selling historical novel by Robert Littell, and from the makers of Gladiator and the Da Vinci Code, THE COMPANY is a gripping and high-powered mini series available to own on DVD on 10th December courtesy of Playback. With an all star cast headed up by Chris O’Donnell (Scent of a Woman, Batman & Robin), Alfred Molina (The Da Vinci Code, Spiderman 2), Michael Keaton (Batman, Beetlejuice) and Natascha McElhone (Solaris, The Truman Show), THE COMPANY is a story of espionage, secrets and betrayal during the Cold War.

This epic action thriller is created by Oscar ® nominated Ridley Scott (Gladiator, Blade Runner) and Tony Scott (The Da Vinci Code), and directed by Emmy ® winner Mikael Salomon (Band Of Brothers). It traces CIA activities over a 50 year period, from the early 1950s in a divided Berlin, the Hungarian Revolution of 1956, the Bay of Pigs debacle in the 1960s through to the demise of the Soviet Union in 1991, as told from the perspective of the soldiers involved: the spies of the CIA and KGB. CIA organised assassinations, covert wars, kidnappings and toppling of legitimate governments speckled with facts and real life characters make up the emotionally charged drama. Behind every manoeuvre and counter-manoeuvre one question spans throughout¦ who is the mole within the CIA?

For a chance to win one of three copies of The Company on DVD, answer the following question:
Which of the following authors wrote the novel, The Company?
a. Patricia Cornwell
b. Russell Ash
c. Robert Littell

Buy The Company at Amazon >>

How to Enter:
– Send an email with the correct answer to [email protected], with the subject “The Company Competition”
– You must include your name, email address, telephone number and postal address, to be considered for the prize.

More Necessary Info:
– NB MUST include name, email, telephone number and postal address (which will only be used for this compie only – guaranteed). If you don&#39t include your details we can&#39t send you info about the prize!
– First correct answer out of the Editor&#39s hat wins the prize.
– Details will be sent to the winner.
– LondonNet is not responsible for prize distribution.
– The Editor&#39s decision is final.
– There is no cash alternative.