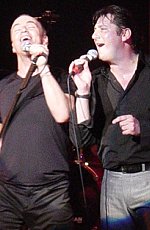 SPANDAU BALLET plan to follow up next month’s new single, Once More, with an album full of new material.

“In a couple of years, we’ll do a new album with 12 original songs,” singer Tony Hadley told The Guardian.

In the meantime, the 80s New Romantic band have a tour to take care of and an album of acoustic covers of their biggest hits.

“With this album, we worked really hard,” said Hadley.

“We sat around a coffee table with acoustic guitars and tried to give it a new feeling. To Cut a Long Story Short is dark and brooding, and Chant No 1 has ended up a swamp track from the southern states of America.”

Keith Richards confirms role in Pirates of the Caribbean 5