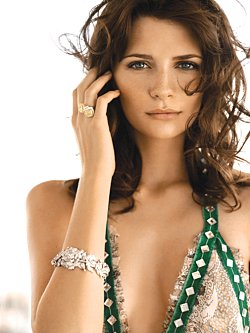 Mischa Barton, the English American film, television, and stage actress, perhaps best known for her role as Marissa Cooper in the American television series The O.C. and hailed as one of People Magazine’s 50 Most Beautiful People, will open the Harrods Summer Sale at 9.00am on Saturday 27th June 2009.

Mischa will be welcomed to the store by Harrods Chairman, Mohamed Al Fayed. After the traditional countdown to the opening of the doors at 9.00am, Mr Al Fayed will take Mischa on a tour of the store’s best bargains.

Speaking ahead of the event Mischa said, “Harrods is iconic and a great buy during a blowout sale is a girl’s dream come true. That said, not only is it an honour to be asked to open their annual sale, but something I’m truly looking forward to.”

Jennifer Aniston and Orlando Bloom all over each other