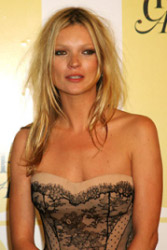 CHRISTOPHER BAILEY has been named Designer of the Year at the British Fashion Awards for his work with Burberry.

Burberry also went home with the British Fashion Council’s Brand of the Year prize at a lavish ceremony held at the Royal Courts of Justice last night, attended by the likes of Victoria Beckham, Claudia Schiffer and Kate Moss.

Moss won a gong of her own, the London 25 Award, for the person who embodies the spirit of London, which was voted for by the public.

Bailey was recognised for his all-embracing work at the famous check-motif designers: not only does he knock out clothes and accessories, but he also handles the look of Burberry’s advertising and even its architecture.