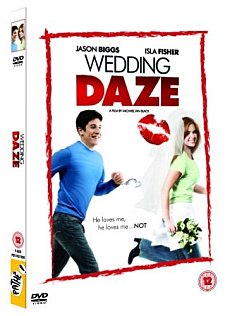 Starring Jason Biggs and Isla Fisher, make a date with this year’s most original and quirky comedy, Wedding Daze. Packed with hilariously embarrassing moments and gross-out laughs, Wedding Daze is released to buy and rent on DVD on 4 February 2008 from Pathé Distribution Ltd and Twentieth Century Fox Home Entertainment.

Unlucky-in-love Anderson (Biggs; American Pie, Saving Silverman), still blames himself for the death of his fiancée, who keeled over when he proposed to her while dressed as Cupid. A year later he hasn’t moved on, and shares a bachelor pad full of empty pizza boxes with his best friend, while still dreaming of the girl he lost.

When his best friend Ted (Michael Weston; Garden State, Scrubs) suggests that he stops living in the past, Anderson takes his advice a little too literally by proposing to the first girl he encounters – a gorgeous waitress named Katie (Fisher; Wedding Crashers, I Heart Huckabees). To his shock, she accepts. However, the fact they know nothing about each other turns out to be the least of their problems. While Anderson’s parents are young-at-heart sex addicts, Katie’s mum and step-dad are as straight-laced as they come – that is until her biological father escapes from a maximum security prison, determined to walk his little girl down the aisle. Meanwhile, Katie’s ex-boyfriend William (Chris Diamontopoulos; American Dad) is less than pleased with the engagement, having only recently proposed to Katie himself, and is determined to put a stop to proceedings.

As Anderson and Katie head to a wedding chapel in Atlantic City with dreams of eloping, a series of misadventures ensures that the path of true love may not run as smoothly as they first hoped. Will an innocent dare turn into the kind of love that both have been looking for all along?