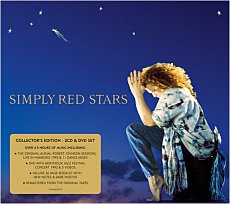 Following an illustrious career that spans three decades and 1000 weeks on the UK charts, Simply Red’s classic LP Stars will be available as a new Special Collector’s Edition package, released on February 25th. Originally released in September 1991, the essential re-issue will be available as a 3-disc (2 CD & 1 DVD) collectors set, to download and as an i-Tunes bundle with exclusive content.

As well as the full, original album, it will feature a wealth of bonus material, over 4 ½ hours in total, including 11 mixes by artists such as Perfecto, Steve Silk Hurley and PM Dawn, bonus videos & a DVD of 1992’s Montreux Jazz Festival concert.

Written by Mick Hucknall, Stars was co-produced by Mick with Stewart Levine, whose credits include The Crusaders, Sly Stone Jamie Cullum & Lionel Ritchie, as well as the hit LPs A New Flame, Life and Picture Book.

Featuring the singles Something Got Me Started. Thrill Me, Stars, For Your Babies & Your Mirror, Stars is widely regarded as one of the highlights of the band’s impressive career, selling more than 4 million copies in the UK and becoming the biggest seller in the UK for two years running in 1991 & 1992.

Alvin and The Chipmunks Competition