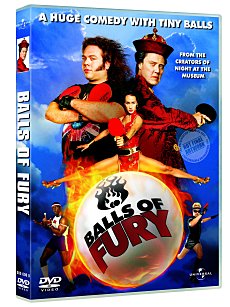 The competition is brutal and the stakes are deadly. Dan Fogler stars as the down-and-out former professional Ping-Pong child prodigy and Def Leppard-devotee Randy Daytona. He left the world of professional ping-pong in disgrace after his defeat at the hands of a hissy East German Karl Wolfschtagg (Thomas Lennon) during the 1988 Olympics. His father’s death on the same day left Randy’s life is a shambles until he gets recruited by FBI Agent Rodriguez (Barry Lopez) for a secret mission.

The FBI want Randy to infiltrate an ‘ENTER THE DRAGON’-style Ping-Pong tournament (to the death!), run by an evil triad leader and one of the FBI’s Most Wanted, arch-fiend Feng (Christopher Walken). Laughter ensues as after two decades out of the game getting back into shape for Randy is one hell of a mission!!

Buy Balls of Fury at Amazon >>

Man of the Year Competition