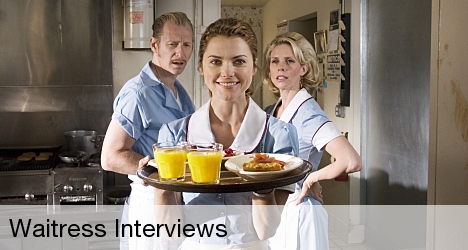 Cheryl Hines joins the talented cast of the lively and buoyant new comedy, WAITRESS. Written and directed by the late filmmaker Adrienne Shelly – who also appears in the movie – it is a highly original story, centered on one independent minded waitress played by Keri Russell, who gets pregnant by her abusive husband and embarks on a risky and potentially scandalous affair with her own doctor. Her lover, her job, baking pies at Joe’s Diner and her friendships at work, provide escape from the harsh reality of her miserable home life.

What kind of woman is your character?

I was very drawn to Becky, my character, because she’s funny and as the film goes on you get to see the other side of her and you discover that she’s a bit lonely and looking for a little bit of excitement in her life.

What drew you to the film?

I was drawn to the film because Adrienne wrote such a funny and moving script, it was true to life but also delightful and I was really passionate about the project from the start. I thought she did such a good job not only creating these characters, but capturing the complexity of life and the choices that we make, the idea that life isn’t black and white. Everybody on the film was so talented and it was a real privilege to work with all the other actors – we became great friends and loved living in the world we created in Joe’s Diner.

What was the camaraderie like between the three waitresses, you, Adrienne and Keri.

We got along very well. We had a lot of fun together and Adrienne really wanted the audience to feel that friendship. So we spent some time getting to know each other, before we started shooting and it sort of carried on into the film.

Keri’s character creates wonderful pies with amazing names such as Kick in the Pants Pie. What would your signature pie be do you think?

Life’s a Joke! There would be chocolate and maybe some hot sauce just to throw people off. It would be very spicy.

What in your view is the film all about?

It’s interesting what people take from this film. I loved that it captures the comedy of life and the tragedy of life at the same time. Life’s not one thing or the other, it’s not always funny and it’s not always sad. If I had to say what the theme of this film is, I think it’s about finding your inner strength and knowing that you can do whatever you want to do, you can make changes in your life, no one is truly, truly stuck. Even though you feel like you are stuck at times, there are times in your life when you feel like there’s no way out, that life will never change and that you are on this path and can’t stop it, there is always a different way. I think this movie lets you know that you can do it. You have choices. You can walk down a different path.

Were you aware that the film was special, while you were filming?

When I first read the script, I felt it was extraordinary. Then when we started shooting it, I enjoyed it, but it’s really hard to know what something will end up looking like, because you do not see everything, you are focusing on your own work. I didn’t know anything about the scenes that Jeremy Sisto or Nathan Fillion were shooting with Keri, because I wasn’t in any of their scenes. So all I really knew was what we were shooting and I knew we were having a good time doing it. There was a good atmosphere. I did get to see Keri Russell and Andy Griffith do a wonderful scene together, in which they are dancing. (he plays the old owner of the diner). I thought it was magical, but I had no idea what the final product would be like and I was overwhelmed by it, when I did finally see the whole film.

What was it like working with a director who not only wrote the script but is acting with you too?

It was exciting working with Adrienne. Because she wrote the script, she knew exactly what she wanted from the characters and from the actors. Everything in that movie was because of Adrienne, the colors, the design, the style and tone, were all choices that she made. It was inspirational working with her.

Was it ever difficult – for example – if she wanted to watch the monitor between takes?

I was never put off by that. When I work on CURB YOUR ENTHUSIASM, Larry David runs the show and stars, so I suppose I’m used to someone who’s got a point of view and wants it seen through their own eyes and their vision and I respect that and appreciate it.

How did you deal with the terrible tragedy of Adrienne’s death when she was killed last year? She never got to know how much audiences are loving her film?

I felt very confused and it did seem unbelievable to me. Adrienne and I connected on a lot of levels, but we both have daughters the same age and we spent a lot of time talking about our love affairs with our daughters. So as a mother, it really did not make sense and it still doesn’t. It’s difficult to say how I deal with it. It’s like losing anybody in your life, it’s not predictable, and you can’t predict when you’re going to think about it or think about that person. You can’t predict how you’re going to feel tomorrow. You hold onto all the memories you have and you are angry with yourself for not remembering more. We never know when we will be seeing someone for the last time and we should go through life realizing that everyday, and appreciating everyone, but we don’t. So I haven’t come up with a good process yet or found a way of dealing with her death.

When you think of Adrienne making this movie, was there one moment that particularly reminds you of her?

Adrienne plays the role of Dawn in the film, she gets married and she’s got on her wedding dress and one day when we were shooting in a little café, Andy Griffith was there, Keri was there and we were having a great time. But it was also stressful because we were on a budget, shooting the movie in 20 days, we were concerned about losing the light, the location, everything. And I just remember Adrienne shooting her scene, then running back to the monitor in her wedding gown, and then she’d come out, give people notes while still in her wedding dress, and then go and do her scene again. She was amazing and funny and so engaging. That’s my memory of that particular scene: crazy and fun all at the same time.

Can you talk about your new movie THE GRAND that is completely opposite to this film?

They are night and day although they are both low budget movies. THE GRAND is an improvisational comedy about a poker tournament. It was crazy and great. We lived in Las Vegas while we were shooting it at the Golden Nugget, which was a dream come true for me. When I wasn’t playing poker on screen, I was playing poker in the casino and they would just call me and tell me to come to the set. It was fun. The whole movie is about the final table at the tournament. When we shot the film, we played poker in real time. We were all huge poker players. We bet on ourselves underneath the poker table and the crew had bets going on who was going to win. Ray Romano plays my husband in the film. It was very exciting and enjoyable.

How good are you at poker?

You have to see the film.

Is there any truth to this being the last season of Curb Your Enthusiasm?

Well I’m in denial and hoping we do another season. I’m working on Larry right now to get him to change his mind. I’ll be terribly sad if it’s over.

As a kid, did you have a real yearning to be a performer?

I knew I wanted to be an actor. When I was six or seven I would write comedy sketches with my sister and we’d perform them in my bedroom for my parents. They weren’t great but my mom and dad always laughed. They were a good audience.

Is your sister acting as well?

No. My sister has her doctorate in education and she teaches at the University of Central Florida and teaches children with special needs.

What goals do you have moving forward?

Hopefully I’ll be shooting another movie, which I can’t talk about yet, but I’m also producing two TV shows right now and doing a lot of writing. One is called HOLLYWOOD RESIDENTIAL about a person who goes into celebrity houses to fix them up, but everything goes horribly wrong. And the other is a series I wrote and created with my friend Julie Welch for the E channel, that hopefully we will be shooting this summer. It’s a scripted show about personal assistants and I wrote it from experience. I was actually a personal assistant myself for director Rob Reiner. So, I was immersed in that world and it was crazy. I learned so much as an assistant. Now I have an assistant myself to make my itineraries when I travel. I don’t do any of that myself, but I know how to do it all. Doing that job made me very organized and much more resourceful.

What kind of boss are you?

I am a very sweet, generous, giving boss – of course.