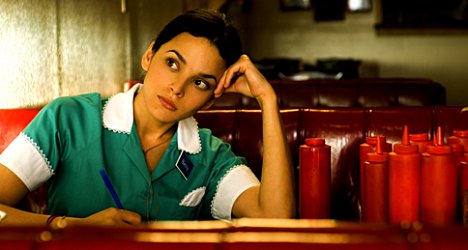 What were your first thoughts on being asked to play the lead in My Blueberry Nights?

Amazement. It came out of nowhere. The director, Wong Kar Wai, approached my agent and asked for a meeting. I went along and saw this odd-looking man, very tall, in dark glasses. He said:’Well, Norah – do you want to act?’ I said:’I don’t know whether I can, but I can try my best.’

Did you feel flattered to be asked by such a well-known director?

I had never heard of him – or his great film, In the Mood for Love. But I watched the film and thought it was amazing. Suddenly, the prospect of working with him seemed very appealing.

How confident were you of your acting talents?

I had no confidence at all. I felt tense, awkward and very stiff. I found it hard to relax. Fortunately, the film was being made in sequence. My character has to feel such tensions and awkwardness in the first few scenes, so that is what saved me.

But you are used to performing, live, to tens of thousands at a time?

That is very different. I am in total control. I write the songs, decide what to sing and how to sing. I even control the recording process. But, with a film, there is no control at all. I just handed it over to others, like the writers, director and those behind the camera. It made me feel insecure at first.

Was there a turning point?

The other actors – Jude Law, Rachel Weisz and Natalie Portman all said and did the right thing to help me relax. They said they were fans of my music, for a start. That helped me feel good about myself.

Three days. It was filmed from every angle, in every way. He had to kiss the cream from my face, so it meant that for every take a lot more cream was smeared on. He must have eaten about a gallon of the stuff. But it was not hard work for me. I just lay there, thinking:’I am being kissed by Jude Law – how bad can this be?’

Was your boyfriend, Lee Alexander, jealous?

No – he just viewed it as a good acting part. We are also going our separate ways. We will always be good friends, but we have worked together, lived together and been on the road together. We have known each other for seven and a half years, which is a quarter of my life. I think we both agree it has run its course.

Is there anyone else on the scene?

I am not even thinking about that at the moment. My thoughts are turning to more travelling and more writing. I want to avoid touring and hard work for the next few months. I need to put something back in my soul!

How have you managed to avoid the spotlight, like Britney Spears or Amy Winehouse?

I have learned now to talk, act or walk famous. I can still walk around New York, without being molested or bothered. I don’t mind autographs – that is part of it. I just do not see the point of being ‘out there’ or behaving outrageously. It will bring nothing but trouble.

My father was George Harrison’s mentor and taught him the sitar. George always said that “gossip is the devil’s radio.” His low-key, modest approach to his work and life made a lasting impression on me. To my father, he was not one of the Beatles. He was just a nice guy who did not want fame to ruin his life.

What are you going to do next in your own life?

I am going to travel and think about song writing. I have worked non-stop for the last seven years. There have been albums, tours, promotions and the film, of course. The temptation is to carry on going while the demand is there. My record company wants a new album and there have been other film offers. But I look around and see a lot of unhappy performers. Maybe too much is demanded of them. I can see the dangers.

What sort of influence has your mum, Sue, had on your life?

She has been my guiding light, in many ways. She was a 1960’s hippy, with flaming red hair. She now has gorgeous white hair and looks stunning. We are not at all alike and bicker a lot. But I am very proud of her. When she split with my father, she took me to Dallas, Texas and worked hard to bring me up the right way. It was just the two of us, living together.

When you came back to New York, at 19, how did you make a living?

I waited tables for a couple of years. I was at the cafe in the Metropolitan art gallery, combining it with the occasional gig. I worked for two dollars an hour, plus tips. So 50 bucks a shift was pretty good. Anything near 100 was great. I rented a loft apartment in Jones Street, of all places. But money was very thin and I rapidly used up my savings.

The thought that I could write songs to entertain and move an audience. I kept on writing and rehearsing. With Lee’s help, I had success. A record company had faith in me, my first album, Come Away With Me, made an impact and I suddenly had Grammy awards and the audience that I had dreamed about.

How did you come to write the title track for My Blueberry Nights?

We were doing a night shoot on the film in New York and I came home at 6 a.m. I was not tired, so went in to my piano room, which faces east, and watched the sun come up. It was such a beautiful sight, the song wrote itself.

Would you do another film?

It it involved kissing men like Jude Law? You bet!