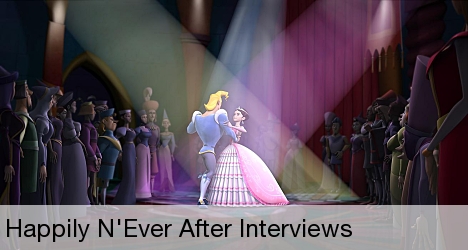 What was your draw to the movie?

The main sort of drawing point for it was the reversal of roles and the fact that they systematically destroyed every happy ending and let the bad guys win and so that kind of switch was the initial draw.

What are your thoughts on the Character of Rick?

The great thing about Rick is that he is a kind of anti-hero he really tries to fly under the radar and not fight the good fight, kind of like Indiana Jones in that respect, he’s like “Oh right, alright ill stop the war!”. And he is the everyman, he doesn’t have a soapbox to stand on but when push comes to shove he makes the right decision. He has help along the way but he has these leadership qualities that he chooses to hide along the way to avoid responsibility and when the time comes, he makes some mistakes but eventually he does the right thing.

Voice work is always fun. You just get to go crazy and you get to try anything you want and they encourage you to try anything you want. There are restrictions in the real world and in animation you get to shout and it goes in someone’s ear and its picked up by their brain and it comes out the other ear and slaps them in the face, and they can really do that, there are no restrictions, it’s a free universe and in the real world I cant make my words do that. I can’t make them go in your ear and come out and slap you in the face.

What is it like to work with your wife?

Its fun because we have a natural chemistry otherwise we wouldn’t have hooked up in the first place… hopefully, and we got to do our AER sessions together in the same room. Her character gives my character a hard time and doesn’t take any lip and Sarah is very similar in that regard and so am I. When they are at odds we have a lot of fun because we know the tricks we have played on each other and we know when it’s time to give one of us a hard time and we had a lot of fun doing that. And there us a lot of that in the script – he needs her to get on board and she’s just not agreeing because she thinks she is meant to be with this prince who is just a stooge and can’t get it right, and he is just trying to do the right thing but its not going his way, and we can have a lot of fun with that.

What do you think the audience will respond to?

What I think that they will love about the film is that you see these fairy tales that you know and love like ‘Little Red Riding Hood’ and ‘Sleeping Beauty’ and you see them sort of turned inside out, in funny and delightful ways. It’s kind of very cathartic to see what happens when all the darker figures start running things. They turn out to be very human too; they want to get drunk and sit around and not have to work so hard, and Frieda has to really make them get up… she has help problems. I just think that it’s very refreshing. It’s a very original story – very contemporary in its way – and very well written. I can’t wait to see it!

What are your thoughts on the screenplay?

Well it’s very funny, there is so much humour and humanity in it. I have been offered a lot of scripts where they want me to play the ‘wicked queen’ or something, which hasn’t been interesting to me because they are relentlessly irremediably wicked all the time. In fact I loved the character of Frieda as I could relate to her. It wasn’t that she was just evil and hated Cinderella, she was just bored out of her mind doing the same story again and again, and she has this opportunity to switch things around and have a little power so she goes for it, and she really enjoys herself. There is something really human about Frieda, which I related to, and it’s a great cast and a very ingenious and imaginative story.

What are your thoughts on the character of Frieda?

I think it’s such a well written script. You are introduced to Frieda as not just your typical wicked stepmother but this woman who is just so fed up with these girls who I guess are just so ugly and unattractive and no matter what she does they are always falling apart. She has the opportunity to seize the moment and seize control and kind of be the star of the movie. I just found it exhilarating to see her having fun – Frieda loves having fun and she has this one day where she gets to wreak havoc and she goes for it.

I have never done an animated film before, well not a full length one, so actually the second time I recorded it I got to work with the writer because what I think is surprising is you’re not on a sound stage with the other actors – you might see a few cartoons with what you might look like but you just have to take it from there and you just have to wing it. I felt Frieda was definitely from New York and I just felt I knew her. I have met a lot of Frieda’s in my life and I just found her very likeable, which is very rare to find in a victim, especially in an animated film.