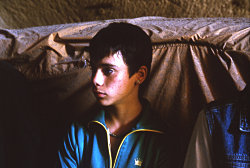 What inspired you to adapt Roberto Saviano’s ‘non-fiction novel’ Gomorrah?
When I read Roberto Saviano’s book, it had only been published for a couple of weeks in Italy, and at that point it wasn’t a bestseller. I found it very interesting, because it changed the image I had from all the mafia movies I had watched before. I realized that I had an opportunity to do something very different from previous mafia movies, many of which had glamorized criminals. I wanted to show the everyday lives of members of the Camorra.

How did you decide on the five stories that you have woven together in Gomorrah?
What was important to me was that the characters and the themes in the individual stories had a universal relevance. That’s why we have the dumping of toxic waste in the Franco and Roberto story, and the confusion between fiction and reality of the characters Marco and Ciro, who think they are living in a Brian de Palma film. And the tailor Pasquale who has talent, which he feels isn’t recognized, and so he goes to work for Chinese competitors – I think that has a fairy-tale quality. I wanted the film to unfold like a silent movie, which connects to people around the world. When we won the Grand Prix at Cannes, I knew we could succeed in doing that.

Why did you decide to start Gomorrah with a massacre in a tanning salon?
This was actually a scene that I added to the screenplay while preparing for the shoot. I discovered that the criminals used to visit these tanning salons everyday, and I thought if the clan members started to kill each other there, it would be new interpretation on the classic barbers scene where somebody has their throat cut. I think it disorientates the viewer, but it’s very atmospheric, and the colours and the machinery are like something out of a sci-fi movie.

Why did you decide to shoot Gomorrah in a dispassionate manner?
I wanted to make Gomorrah like a documentary or like a piece of war reportage. Of course it is all a reconstruction and there are actors, yet I wanted to make the audience forget there is a film-crew behind the camera. The source material is so real and true and the locations are so powerful that I didn’t need to embellish things visually. When people in Italy said they thought Gomorrah was a documentary, I knew I had done a good job!

How were you able to shoot in locations where the Camorra openly operate?
I made it clear to people that I was making a movie about the Camorra, not against them. During my research I discovered that not everything is black and white in their world, that there are grey zones. You talk to people who are connected to the System and you realize how easy it is to get involved in criminal activities. The other thing which helped me is that the Camorra didn’t realise that the movie would be so successful.

One of the most noticeable aspects of the film is that the Italian authorities are almost entirely absent. Is that true to life?
To show that it is tough, the new government under Berlusconi has sent the army into Naples. To me this is something for show, it is a spectacle, but it is not enough. For me you have to understand the Camorra from the inside. I tried to show the problems of education, employment and the relationship between the citizen and the state: The Camorra live in these communities, and they solve peoples’ problems. The Saviano book was really important because in Italy people have started to talk about these problems, and now the government has to do something.

How do you define yourself as a film-maker?
I don’t make movies because I think I can change the world – that’s a problem for politicians – and I don’t particularly like ‘message’ movies. I tell stories with images, emotions and characters. For me, cinema is about expression more than information.