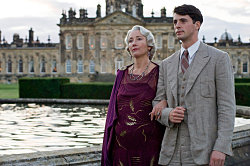 In Brideshead Revisited you are playing a character who is much older that you really are.
It was a struggle. (jokes)

When you had the ageing make-up on and you looked in the mirror for the first time, did you see your mother looking back at you?
She certainly did and in that (Scottish) tone of voice. She pursed her lips and said…’You are just right!’ Yes, it was very alarming. It was odd. I was a bit worried about playing a mother, I have tried to avoid it. But my (screen) children were very nice. We did have a very good time and they did not treat me as if I was an old bag…a dusty old bag and not worth talking too. So I was very grateful for that – thank you chaps!

Did you have any worries about taking on an icon like Brideshead Revisited, which had previously been done as an acclaimed TV series?
I didn’t even see it, I 20 years old, I was a punk rocker! I was trawling round London in a lot of zips.

So (back then) you preferred Johnny Rotten to Castle Howard?
Yes, absolutely! I have grown into it now.

Was part of the fun during filming to be swanning around Castle Howard as though you belonged?
Castle Howard is so interesting because of course it is run as a business now. And the difference between swanning around it when Lady Marchmain was in charge was that she lived in it – in the way that the Queen doesn’t even live in Buckingham Palace. It’s like…Oh, we will have the Gilt Room opened for you, Madam…Whereas Lady Marchmain would have been wandering around wherever she wanted. She would have had vast quantities of servants, like Lady Astor. She (Lady Astor) used to tell the butler to make Punch out of the Chateau Latour 1914 because she was a teetotaller and didn’t know any better. She was very eccentric. So I kind of think that kind of thing went on.

We were living as it were (during filming at Castle Howard) partly in that bit – which is run like a theatre – and partly in the bit where they keep the J-cloths and the linoleum. I have been back stage in Windsor Castle and there is a lot of linoleum; a surprising amount, considering. So it is just the front of those places and there is a backstage bit that is completely disconnected – and that’s what I find fascinating is that it is like a theatre.

Lady Marchmain can appear to be a rather cold woman so how did you go about playing her?
I worked out this morning actually, rather too late, that the thing about Marchers, as I like to call her, is that she really does believe that if she doesn’t do right by her children that they will go to Hell. In the same way as I believe that if I did not prevent my child from running out into the road that she will get run over. So I assume her with the same vehemence in relation to cars as Lady Marchmain assumes her children in relation to anything really – from food to sex, to marriage, to whatever. So she believes that she is doing the right thing – she is giving them the tools with which they can save themselves. She is giving them, as it were, the religious version of the Green Cross Code. So whilst her emotional methods with her children are cruel – dysfunctional to the point of psychosis – she does believe that she is doing the right thing for all the right reasons.

What reaction do you hope that anyone who sees Brideshead Revisited will have after seeing the film?
I hope that they leave with the urge – a strong and violent urge – to down a large vodka martini…because of the emotional drainage. I mean that if you have experienced something that is so emotional you need a drink.

Do you agree with the claim that Brideshead Revisited might perpetuate the myth about Oxbridge being louche seats of learning?
What myth? I went there, I am saying that ironically. It is in some ways a myth. But women were not granted membership of Cambridge University until 1949. When I went to have my interview (for university) at Camden School For Girls in Camden Town in London where they did not know anything about Oxbridge, when they asked which college I wanted to apply for, I chose the one that had the prettiest gardens. You don’t choose colleges upon that kind of criteria! Because A) they are girly and B) you are going to get rejected. But when I went for my interview the Dons would literally hug the walls when women passed. And that is not that long ago.

I am guessing they were not hugging the walls with excitement?
No, they were cowering…horrified.