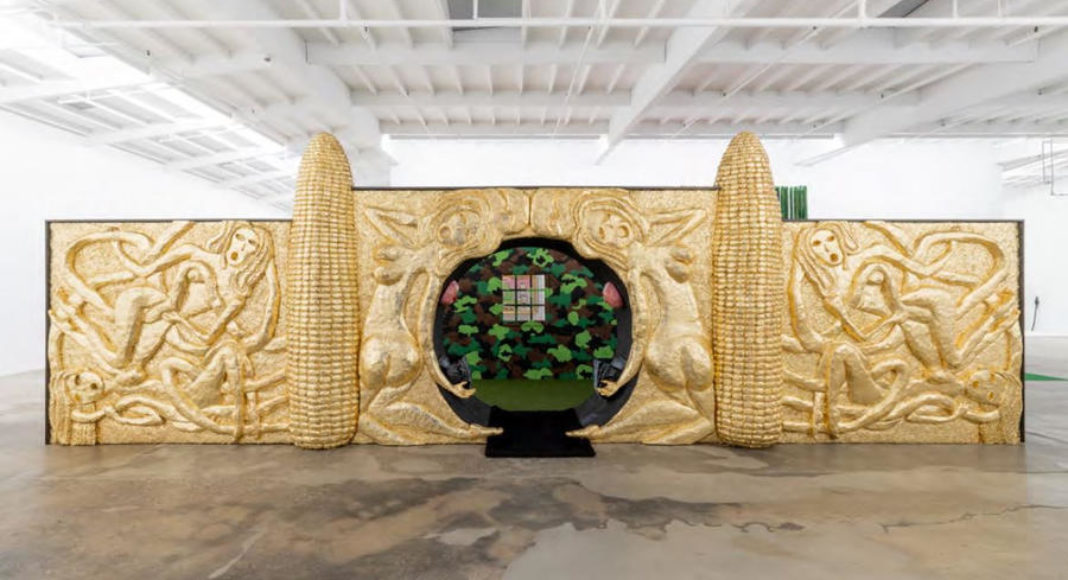 A series of installation vignettes by the American artist.

This year's Annual Commission is the first UK exhibition of American artist Trulee Hall, following her sold-out operatic performance at Zabludowicz Collection in March 2020. Debuting her newly commissioned project alongside works from the Collection and a number of videos, paintings and sculptures, the exhibition presents work made over the past two years. The space of the gallery is transformed by a series of Hall's self-contained, elaborate vignettes - the viewer moves through discordant scenes, each presenting a tangled meta-narrative. Installations comprising video, sculpture, paintings, composed soundtracks, and kinetic mechanisms create dense environments that invite the visitor to step around, peep through, and settle in, allowing a fractured and faceted perspective. Reappearing tropes populate the exhibition; stylised female nudes with mouths agape, rendered in gold and primary colours; bodies of many ages, genders and sizes relishing their physicality; and often repeated phallic serpents and corncobs. At the heart of Hall's practice is a humorous and unabashed 'erotic grotesque', a fun-house panopticon of cyclical looking - where glory holes, peeping toms, nightmare monsters and sexy bodies jostle for attention. Not one to pass judgement or be constrained by binaries, Hall prods the oppositions of real and fake, gender and sexuality, object and subject, dominant and submissive, good and bad, silly and serious. Her multi-layered works topple in on themselves like so many wobbly movie set backdrops, burying the viewer in unorthodox representations, requiring them to assimilate and synthesise a unique experience. At the centre of the exhibition is Tongues Duel The Corn Whores, An Opera, a commission that began as a performance of the same name, realised in the space. An exploration of ritual and sexuality, the work weaves together Hall's original score, libretto and choreography with an elaborate set, costumes, and props, rendered in her often used trifecta of CGI, clay animation and live footage. The opera revolves around two female archetypes: the conservative and spiritual 'Madonna' and the hedonistic and provocative 'Whore'. As usual in Hall's work, live footage begets CGI, begets claymation, begets live footage - there is no hierarchy of reality or rendering. Trulee Hall's work is informed by her childhood growing up in the Southern state of Georgia, her current home of Los Angeles, and a background working on film sets, in artist studios and as a tech for major theme parks. This informs the alchemy of her practice, fuelling her embrace of lavish simulacra; her objects and characters are stand-ins for larger propositions or archetypes. The worlds Hall creates are enchanting and enticing, yet retain an underlying uneasy seediness that permeates their experience - inviting the viewer to question if the discomfort they feel is warranted or is a result of their own internalised prudishness. A show of this breadth firmly places Hall and her work in the legacy of LA-based artists whose sense of the theatrical teeters towards revelling in the darker underbelly of our pop-culture psyches; with roots in Edward Kienholz, through Paul McCarthy and Kaari Upson. The exhibition will be accompanied by a programme of live and online events, and the launch of Hall's first monograph publication.