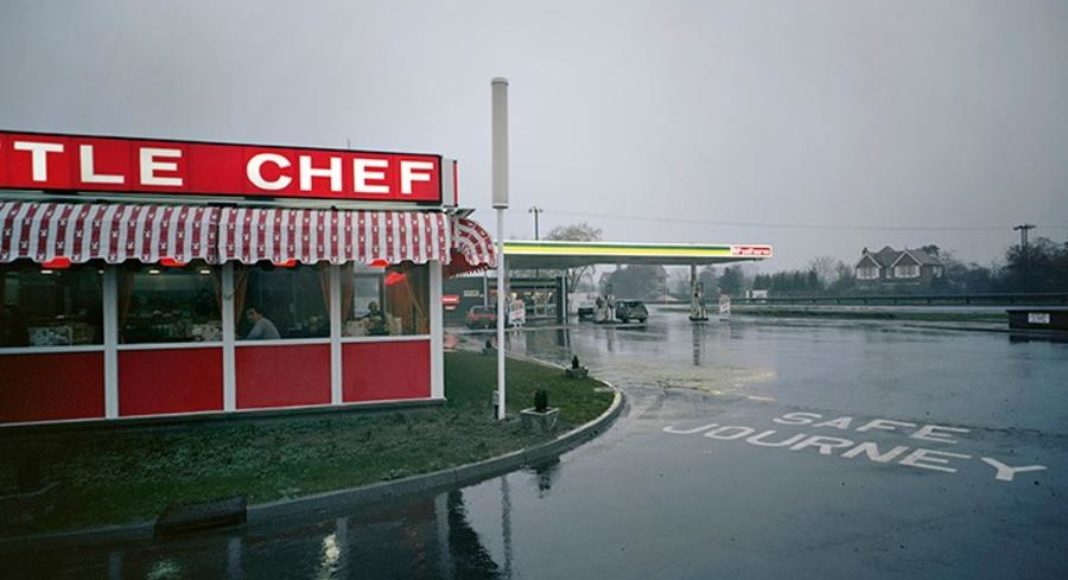 In the early 1980s, Paul Graham travelled repeatedly along the A1 with a large format camera to record the people, buildings and landscape of Britain. The resulting colour photographs were first published as A1: The Great North Road in 1983, where they provide an incisive historical document of the years of Margaret Thatcher's government and of the UK's declining industrial base. Forty years on, an exhibition of vintage prints of this series, Graham's first solo UK exhibition in five years, will coincide with a new edition of the book published by MACK. The A1 was the first major road to run the entire length of England. Conceived as the central artery of the 1930s road system, the A1 travels from London ,through the industrial Midlands and the north east of England, to Edinburgh. The 400-mile route was once the busiest road in the country, quickly receiving the title the 'Great North Road'. In the late 1950s, however, the road was usurped by the fast and efficient motorway system. By the time Graham photographed it in the 1980s, the road and its infrastructure were in a state of disuse, decline and atrophy. Graham self-published A1: The Great North Road, and as the first colour photography book in the UK, it had a significant impact on the medium in Britain. Uniting the tradition of social documentary with a fresh approach to colour, it paved the way for a new generation of British colour photographers to emerge. A1 - The Great North Road has since become a defining photobook of the twentieth-century, and in 2011, MoMA, New York, acquired the complete set of prints,, the original set Graham had used to print his first book in 1983. The exhibition will include some rarely seen images from the series which were not included in the book alongside familiar photographs such as the still-life of a Bible at Blyth Services, a woman at a bus stop in Mill Hill in North London and young executives outside the Bank of England. . The combination of landscapes, interiors, still-lives and portraits in A1 - The Great North Road collectively present a compelling picture of Britain in a time of great social change. A1 - The Great North Road RRP u00a340 is published by MACK in September 2020. The exhibition at Huxley-Parlour gallery is held in collaboration with Anthony Reynolds Gallery.