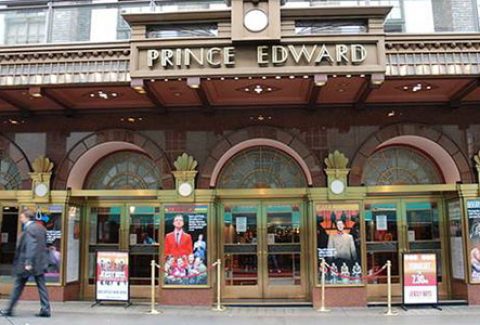 The Prince Edward Theatre was designed by Edward A. Stone, also an architect for the Piccadilly theatre, in 1928. With interior decoration by Marc-Henri Levy and Gaston Laverdet, the building itself was a success. A spacious art deco foyer greeted audiences, with staircases leading off to the stall and dress circle. Themes of fuchsia and gold made the interior warm and welcoming. It opened on April 3, 1930 with a performance of the musical Rio Rita. Unfortunately it had checkered success with shows, forcing it to change hands and venue uses repeatedly. The Prince Edward 1935 it was converted to a dance and cabaret hall, being renamed the "London Casino", and renamed again as the "Queensberry All Services Club" in 1942. After the war it became the London Casino once again and in 1954 was converted to a cinema, reopening as "Castino Cinerama Theatre".

In 1978 it was converted back to a theatre and returned to its original name, reopening with the world premiere of the musical Evita. Then just prior to the opening of Mary Poppins in December, 2004, The Prince Edward Theatre underwent some refurbishment to improve the bar areas, font of house facilities, and the dressing rooms.

With a capacity of 1,618, The Prince Edward is currently showing Jersey Boys and awaiting the much-anticipated return of Miss Saigon.