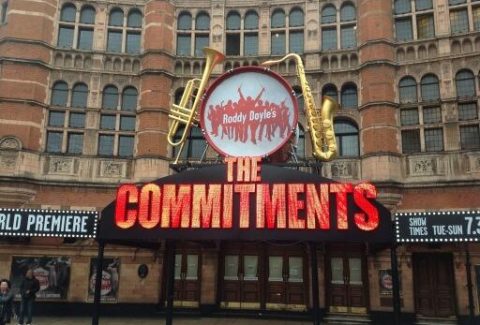 The Palace Theatre, London, is an imposing red-brick building that dominates the west side of Cambridge Circus.

Commissioned by Richard D'Oyly Carte in the late 1880's, it was designed by Thomas Collcutt. D'Oyly Carte intended it to be the home of English grand opera, much as his Savoy Theatre had become the home of light opera with the Gilbert and Sullivan series. The foundation stone, laid by his wife Helen in 1888, can still be seen on the facade of the theatre, almost at ground level to the right of the entrance.

The Royal English Opera opened in January 1891 with Arthur Sullivan's Ivanhoe. No expense was spared to make the production a success, including a double cast and "every imaginable effect of scenic splendour" (Hesketh Pearson, ''Gilbert and Sullivan''). It ran for 160 performances.

However, this was not enough to sustain the venture and D'Oyly Carte sold the theatre within a year, and it was renamed the Palace Theatre of Varieties. The name was changed to The Palace Theatre in 1911.

On March 11, 1925 the musical comedy No, No, Nanette opened at the Palace Theatre starring Binnie Hale. The run of 665 performances made it the third longest running West End musical of the 1920s.

The Palace Theatre was also the venue for Fred Astaire's final stage musical Gay Divorce which opened there on November 2, 1933.

The last years of the twentieth century saw two exceptional runs for The Palace tickets: Jesus Christ Superstar and Les Misérables. The latter ran for eighteen years, having transferred from the Barbican Centre on December 4, 1985. The show is still running at the Queen's Theatre just 100m further up Shaftesbury Avenue, having transferred in April 2004.

Also premiered at the theatre were, the London premiere of Monty Python's Spamalot on 2 October 2006 which was followed by Priscilla, Queen of The Desert The Muscial