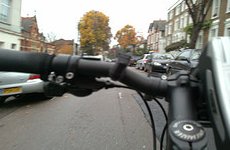 YOUNG FEMALE LONDONERS are in the most trouble when it comes to cycling, according to a new survey on bike safety.

The poll for insurers Protectyourbubble.com found that 18% of British 18-24-year-olds admitted to having damaged a vehicle while riding a bike, compared to only 8% of over-55s.

Meanwhile, 17% of women cyclists fessed up that they’d hit a pedestrian, against 13% of men admitting a similar blunder.

Of course, it could be that both young people and women are simply more honest than their comparators, but few would doubt the survey’s other major finding – that London poses more dangers for cyclists than anywhere else in the UK.

Some 42% of London cyclists have been knocked off their bikes at least once, says the poll. That lines up against 41% for cyclists in the surprisingly almost-as-dangerous East Midlands; 38% for those in the south-west; 37% for Scottish cyclists and 25% for pedalling Welsh people.

“Despite significant investment by borough councils to improve road safety for cyclists, it is worrying how many London bike users have been involved in incidents with other road users,” said Stephen Ebbett, director of Protectyourbubble.com

“It also might raise a few eyebrows just how many Londoners have been knocked off their bikes on more than one occasion. The fact is that London roads are dangerous places and cyclists need to ensure they are safe and prepared at all times.”

Earlier this year, another survey reckoned that cycling is more dangerous in Britain than in the rest of Europe, so by extrapolation it looks like young, female Londoners are in the most peril of any bike user in Europe.