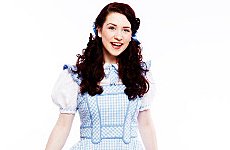 THE WIZARD OF OZ opened at the London Palladium last night, with Danielle Hope, winner of the BBC’s Over The Rainbow TV talent competition, out to take the first-show plaudits in the lead role.

The new production follows the format made so famous by the 1939 film, including all the well-known songs, such as Off to See the Wizard and Over the Rainbow, plus a few new tunes penned by Andrew Lloyd Webber and Tim Rice.

It’s the first time the pair has teamed up since writing Evita 30 years ago.

Lloyd Webber, sporting a green jacket that wouldn’t have looked out of place in the Emerald City itself, was one of the many celebs to turn up last night. Among others to be spotted were Rowan Atkinson, Rory Bremner, Sir Michael Caine, Charlotte Church, Sir David Frost, Tamzin Outhwaite, Phillip Schofield, Barbara Windsor and Michael Winner.

Reviews have so far been kind to the new addition to London’s musical dreamland, The Wizard of Oz scoring an average of three or four out of five on the critics’ score-sheets.

What united all the critics in full-on praise were the performances of the four dogs that play Toto.

Hope shares the dog-love – “I feel I’ve made a connection with them all,” she said – but during the preview run, she’s had to cope with the inevitable badly timed canine toilet disaster.

“I don’t think the audience noticed,” she said.

The Wizard of Oz runs until at least 17 September and there are still tickets left.

For an alternative take on goings on in the merry old land of Oz, try Wicked, which looks at events from the point of view of the Wicked Witch of the West.