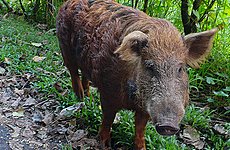 SCORPIONS, Siberian Chipmunks and Wild Boar are just some of the exotic and scary animals to have set up home in and around London in recent years, according to a new survey.

Some of the stories of how the animals have prospered read like something out of Fantastic Mr Fox or Chicken Run. Wild Boar made good their escape from their pens by taking advantage of the devastation across the south-east during the Great Storm of 1987.

There are now reckoned to be 900 of the fearsome beasts running wild in parts of Kent.

Whether they come across Siberian Chipmunks on their travels is left unsaid, but The Eden Wildlife Report estimates there are now 1,000 of our furry friends in the area, descendants of a plucky few who sneaked in through the Channel Tunnel.

Other exotic types to have escaped captivity include aardvarks, wallabies and ring-necked parakeets; the latter now boast a population of 50,000, mostly in south-west and south-east London.

The worry is that these newcomers spell danger for long-established species.

“The report shows that a number of exotic, non-native species currently existing in the wild in the UK are considered to pose a threat to some indigenous species,” said report author, Dr Toni Bunnell of Hull University.

Hopefully one of those indigenous species doesn’t include homo sapiens.