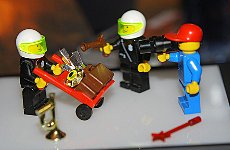 A WHOLE Metropolitan police unit in south London faces a probe on allegations of corruption and laziness, including the supply of drugs and failure to bother with patrols.

“If found proven we will take robust action.”

The six officers who make up the Mottingham and Chislehurst North team, part of Bromley’s police zone, are under various investigations including:

“It’s only right that the Met carries out investigations when there are suggestions that officers or staff have acted in a way that does not meet the standards we and the public expect,” added Griggs.