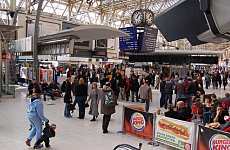 LONGER platforms, easier access to trains and a revamped roof are all on the cards at Waterloo, as the station serving south-west London and beyond struggles to cope with a huge increase in passenger numbers.

“We need to do something quite radical because of an increasing number of people using the station,” said a spokesperson for Network Rail.

“The number has grown by 40 per cent over the last 10 years and we expect it to increase by another 30 per cent over the next 10. These proposals will not only mean more people can fit on trains but it will provide an easier link with the Underground.”

One of the biggest areas of reconstruction would be in lowering the current platforms down to the level of those that used to serve the Eurostar before it was snatched from Waterloo and handed to St Pancras.

The idea is that the new level would provide quicker access for passengers both to the street level – and then to the South Bank – and down to the Tube interchange.

One glitch for the plans could be in the form of complaints from English Heritage, which wants the whole station protected under Grade II Listed status, meaning only minor re-development schemes would be allowed.

EH might feel emboldened in their objections given the change in development climate blown in by Boris Johnson. The Mayor has already put a dampener on plans for three tower blocks next to Waterloo.

Even if the Waterloo scheme sailed through the planning process, building work isn’t thought likely to start until 2013.