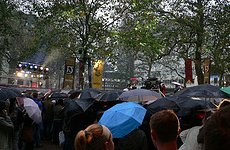 HARRY POTTER fans – up to 10,000 of them – have braved the torrential rain to mass on Trafalgar Square ahead of tonight’s premiere of Harry Potter and the Deathly Hallows: Part II, the final instalment in the eight-part boy-wizard series.

Apparently, it’s rained at every Potter premiere these last ten years, as our photo from 2005 shows.

The incredible fan-loyalty to the Potter films and books has been put down to “magic” by one of the movie’s stars, Jason Isaacs, who plays Lucius Malfoy.

“Frankly, I think they would turn out in earthquakes and tornadoes,” he said.

“That’s the effect the Harry Potter stories have. A lot of people have tried to understand why but nobody really understands. It’s magic.”

An extra touch of that Potter magic will be on show tonight when Potter-world shopping street Diagon Alley is re-created between Trafalgar Square and the cinemas showing the new movie on Leicester Square.

Early press reports hint that the reviews for Deathly Hallows: Part II will be very positive. But, for all the celebratory atmosphere, for many involved in the films, this is a sad time.

“Hermione’s been like my sister,” said Emma Watson, who plays Hermione Granger.

“She feels so real to me. I will miss being her. That is devastating. She has pushed me and made me a better person.”

You can watch the premiere events on YouTube. See here for details.