MENUMENU
Home London News Usain Bolt Could be Powered by Pie and Mash at the London... 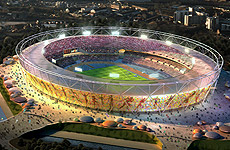 LONDON OLYMPIC officials are being urged to dish up traditional Cockney grub when the Games hits town in 2012.

“We want a hearty cockney presence, with pie and mash, jellied eels and fish and chips.”

Wales is talking in the main about spectator food, but all three meals listed provide protein and carbohydrates essential for sporting success and even the high fat content might not go down too badly given athletes can burn off excess calories easier than most.

The main missing ingredient for an all-round balanced diet is vegetables, but that’s where the admittedly narrow cor blimey London platter could be helped by more recently arrived culinary treats.

“It is also equally important for there to be significant Asian, African and European influences,” said Wales.

In any case, it’s hard to believe pie and mash is worse for the professional athlete than a bargain bucket of KFC – the favourite food of world’s fastest man Usain Bolt.

The good news for Wales and other jellied eel fans is that the London Olympics organising committee appears to have left the door open for local fayre.

“There will be plenty of non-branded food on sale, from a variety of suppliers,” said a spokesperson.

That’s bureaucrat-speak for, “Make it a double helping of mash and don’t stint on the liquor!”