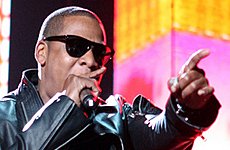 JAY-Z has been unveiled as the headliner for the first night of Hackney Weekend 2012, a music festival that’s part of the celebrations for the London Olympics.

Along with the Young Forever rapper, at least 100 acts are set to turn up on the famous Hackney Marshes on 23 and 24 June, among them Dappy, Florence and the Machine, Leona Lewis, Plan B, Tinie Tempah and Will.i.am.

Jay-Z is top of the bill for the first night of the Radio 1-organised event; the identity of the headliner for the second night is to be kept secret until next month.

“Our goal was to deliver the most ambitious and exciting event in Radio 1’s history,” said the station’s Jason Carter, who’s organising Hackney Weekend 2012.

“With the artists already announced I think we’ve achieved that, but to now add the world’s biggest hip hop icon, Jay-Z, to the line-up, is fantastic news.”

Tickets for the Hackney Weekend are free and there are 100,000 of them, but priority goes to those who live in the boroughs nearest the Olympic site. Closing date for applications is 19 March.