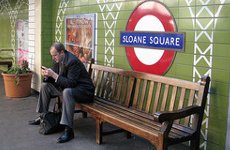 MOBILE phone users are to be charged £2 a day to use their devices in London Underground stations from 2013.

Cheaper rates are to be made available for those who buy in bulk, so that a weekly Tube-mobile pass is to cost £5 and a monthly pass £15.

Customers of Virgin, Vodafone and EE (including Orange and T-Mobile) will carry on getting access for free as Virgin run the Underground Wi-Fi network and the others have signed up as partners.

According to Virgin Media boss Jon James, those partnerships mean that “the majority of Tube users can stay connected for no extra cost”.

At the moment, all Tube travellers have free access thanks to a deal done by London Mayor Boris Johnson with Virgin Media that originally covered the Olympics period and was then extended to the end of this year.

That’s when 20 more stations are due to be added to the list of participating venues and then another 28 are to join up early next year.

“WiFi on London Underground has been an incredible success with over 700,000 people already online and a remarkable million sessions every day,” added James.

Lincoln leads the way in run-up to the BAFTAs with nine...