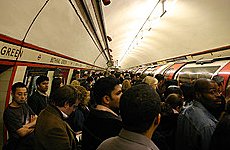 LONDON UNDERGROUND could be a death trap for tourists at the London Olympics, thanks to “non-trained staff at key pressure points”.

That’s the startling conclusion drawn by Tube union boss Bob Crow after reviewing the plan for hundreds of volunteer staff to help out with crowd control during the 2012 Games.

“With the Tube already at bursting point, and with millions more expected for the Olympics, the last thing need is wholly unprepared volunteers controlling hundreds of thousands of passengers through stations like Oxford Circus or Stratford.”

In response, Transport for London says that the volunteer staff will be used only to help with passengers’ directions.

For actual crowd control, TfL say they have planned for the usual numbers of station staff to be “supplemented by Revenue Control staff, LU’s Special Requirements Team of flexible station staff and operational trainers who are all operationally licensed”.

But Crow forecasts that volunteers will soon find themselves in crowd control situations, whatever the official plans say. The union chief’s solution is for London Underground to reverse its scheme to cut 650 trained station staff.