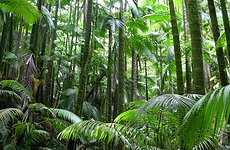 Tory MP Nadine Dorries has signed up for I’m A Celebrity… Get Me Out Of Here!, in a move which means her constituents will be unrepresented for almost a month as she plays with cockroaches in the Australian jungle.

David Cameron is not likely to be chuffed at Dorries’ latest stunt; the pair have already fallen out after she called the Prime Minister an “arrogant posh boy”.

Before her departure, Dorries took a side swipe at the rest of her colleagues when she said that she was “frightened of rats, but then again I do work with them” and was unrepentant over her trip, arguing instead that other MPs should follow her into the jungle.

“I’m doing the show because 16 million people watch it,” said the MP for Mid-Bedforshire, who is thought to be earning £40,000 for her appearance.

“Rather than MPs talking to other MPs about issues in parliament, if people are watching I’m A Celebrity, that is where MPs should be going. I’m not going in there to upset people, but I have opinions.”

But Dorries’ explanation didn’t wash with the right-leaning TaxPayers’ Alliance.

“While Nadine Dorries is playing at being a Z-list celebrity in the jungle, her constituents will be left without an MP to represent them in Parliament,” said a TPA spokesperson.

Dorries, 55, will be joined in the Australian outback by the likes of actresses Helen Flanagan, Charlie Brooks and Linda Robson, boxer David Haye, former Dr Who star Colin Baker and Made In Chelsea star Hugo Taylor.

This year’s I’m a Celebrity… starts on Sunday, 11 November on ITV.