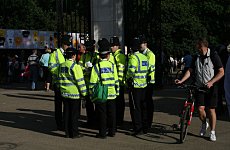 THOUSANDS of police officers are to march on Westminster today as part of a campaign for more pay in what is being billed as the first such protest in the force’s history.

Traditionally, the police steer clear of mass action in favour of negotiated settlements, but many officers are angry at what they see as government backsliding on a 2.5 per cent pay deal that has now been downgraded to 1.9 per cent.

Around 15,000 police men and women are expected to take part in the demo, with a smaller group going on to present a petition to Home Secretary Jacqui Smith, the minister in charge of the police.

“We’re the one group of workers who can do very little about having an award imposed upon them – other workers can threaten to take industrial action,” said Jan Berry, chair of the Police Federation.

It is illegal for the police to strike, but a substantial minority of officers believe that should change, a minority that has increased during the current row over pay.

Though they are well practised in the art of managing marches, the police are wet behind the ears as far as taking part goes: in advice to their members ahead of today’s event, the Police Federation reminds its members to go to the toilet before the march and to wear comfortable shoes.