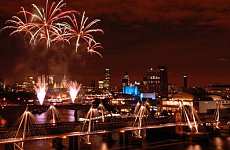 LONDON’S river takes centre stage this weekend with the Mayor’s Thames Festival, an event now firmly established in the capital’s calendar after 14 years of watery fun.

At least half a million of people are expected to turn up to see the array of events on offer, events that this year include river races, circus acts, a wide variety of live music and the now traditional mega fireworks display.

Saturday’s Thames Festival River Parade, filled with a fleet of boats old and new, big and small, is a sight to behold, but the festival is about what happens alongside and above the river as much as on the Thames itself.

For instance, there’s the Festival Market (Saturday and Sunday) which features a galaxy of small stalls and runs along the whole length of the festival; activities on the Thames Beach alongside Gabriel’s Wharf (Sunday); a massive cook-in and banquet on Southwark Bridge (Saturday) and to end it all a glittering Night Carnival involving over 2,000 dancers, musicians and masqueraders.

The Mayor’s Thames Festival takes place between Westminster and Tower bridges, from 12 noon to 10pm on Saturday 11 and Sunday 12 September. It’s free.