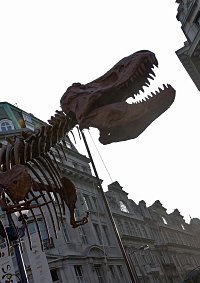 CARS and buses get the push at Oxford Street this Saturday, 23 May for Traffic Free Day.

Previous traffic-free days in central London have proved hugely popular and it’s not just the novelty of being able to stride down the middle of the world’s most famous shopping street without a bus up your behind that attracts the crowds.

There is also plenty of family-style entertainment on show, including a 10ft model rocket, a 13ft model dinosaur and crazy characters of various heights out of the film Night at the Museum 2.

Compared to some dire predictions, Oxford Street has done relatively well in the recession so far and many of the street’s stores plan to add to the cash flow by staying open until 9pm.

Lots of those same shops – Debenhams, John Lewis and Selridges to name just three – are also putting on special events and promotions throughout the day, including a hidden prizes game, where people will get to take free stuff home with them.

Traffic Free Day on Oxford Street starts at 12 noon on 23 May and carries right on through until 9pm.