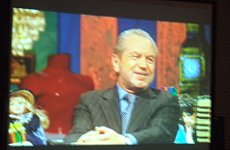 BORIS JOHNSON could face a challenge from The Apprentice star Sir Alan Sugar in the next London Mayoral election in 2012.

This week the pair teamed up to push a scheme to increase apprenticeships in London, but Sugar didn’t mention that he might be after a new job of his own – Johnson’s.

“We are pushing forward by expanding current programmes and creating new ones,” said Johnson in a speech which may have had a double meaning for Sugar.

Sugar has been sounded out by leading lights in the Labour Party and spoke to a party rally last night.

There were rumours that the famous Amstrad businessman had been approached by the party in the run-up to last year’s election – Sugar is close to Prime Minister Gordon Brown – but this time around, the talk appears more serious.

Labour strategists see Sugar as the ideal charismatic candidate to beat both former Mayor Ken Livingstone in the party’s nomination process and Johnson in the main event.

Boris Johnson Defends ‘Beaten Up’ BP from US Attacks