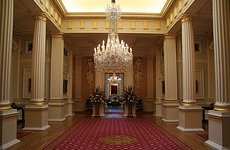 HARRY POTTER author JK Rowling says that she is “prouder than I can say” to be nominated for the ancient accolade of Freedom of the City of London, a prize to be presented during a ceremony at Mansion House (pictured) next month.

Now primarily symbolic, the Freedom of the City of London once came with practical benefits, including the right to drive sheep over London Bridge and the privilege of being sent home in a cab rather than being chucked in police cells if found drunk in the street.

Rowling didn’t discuss her shepherding skills in accepting the nomination, but she did come up with a previously unknown drinking fringe benefit.

“I am prouder than I can say to be given the Freedom of the City, which, (and few people realize this), entitles me to a free pint in The Leaky Cauldron and a ten Galleon voucher to spend in Diagon Alley,” said Rowling.

Rowling was also keen to stress her family connections to London.

“Both my parents were Londoners,” she said.

“They met on a train departing from King’s Cross Station in 1964, and while neither of them ever lived in London again, both their daughters headed straight for the capital the moment that they were independent.

“To me, London is packed with personal memories, but it has never lost the aura of excitement and mystery that it had during trips to see family as a child.”

Lord Mayor of London, Alderman David Wootton, said he was “delighted” that Rowling had accepted the City’s Freedom.

“Her Freedom, which is bestowed on her for services to children’s literature, recognises two unique achievements – the astonishing success of the series, and the way in which Harry Potter’s adventures have not only enthralled book lovers, but also encouraged many young people to lose themselves in a book for the first time.”

Rowling’s Freedom of the City of London award in a ceremony that dates back nearly 800 years, takes place on 8 May. Meanwhile the making of Harry Potter studio tour is up and running.