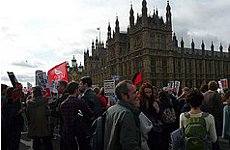 DOCTORS, nurses, other health staff and patients’ groups step up their protests against the privatisation of the National Health Service this week with demonstrations planned for outside parliament and a London-wide advertising campaign in the can.

“Dear Mr Cameron, you’re making a big mistake with the NHS,” reads the quote from a doctor on one of the ad posters, which will be seen on 180 billboards across town after campaign group 38 Degrees raised nearly £300,000 in donations to pay for the ad-spend.

Wednesday sees a major demo outside parliament, where the House of Lords votes on the latest stage of the Bill that is set to turn large parts of the NHS over to private health companies.

“Health workers fear the extension of markets will have a devastating impact on patient care, especially poorer people who will find themselves pushed to the back of ever-growing waiting lists,” said Frances O’Grady, TUC deputy general secretary and member of the All Together for the NHS group.

After the protest, there’s a meeting in Westminster Hall where speakers are scheduled to include Unite’s Len McCluskey, the union boss in the news last week for suggesting anti-government campaigns should target the London Olympics for maximum effect.