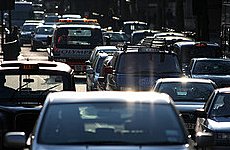 LONDON has been crowned king of the traffic jam, its roads suffering the worst road congestion of any city in Europe and experts say new measures brought in by Boris Johnson are likely to make things even more stuffed up.

According to research by digital map company Navteq, London leads a list of European cities for regular snarl-ups, with Paris and Dublin taking second and third worst spots. At seventh place in the league table, Manchester is the only other UK city in the top ten.

Navteq has piles of data on traffic thanks to its products being used by police departments, local authorities and all sorts of GPS devices.

“[Local] circumstances and many others intersect with time to produce traffic,” he said.

“Because the fascinating complexity of traffic is that it’s not only about movement from here to there, but from now to then.”

Meanwhile, London Mayor Boris Johnson has scrapped the western extension bit of the Congestion Charge zone, which is set to increase traffic flows.

Johnson has also put up bus and Tube fares and changed traffic light phasing, both of which are predicted to make driving more attractive and therefore increase congestion.

Those Most Congested Euro Cities in Full:

Sir Paul McCartney Gets Back in the Saddle