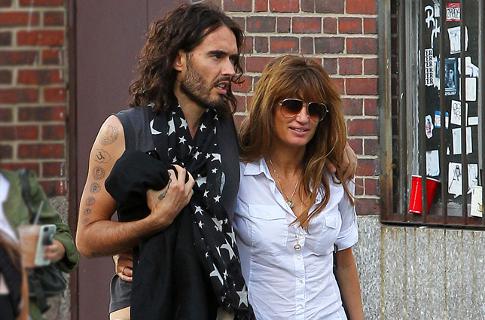 The British comedian – who was previously married to ‘Roar’ hitmaker Katy Perry – has been dating magazine editor Jemima Khan but appeared to suggest the romance is over during his stand-up show in Atlanta, Georgia, on Saturday (28.08.13).

Speaking on stage at the gig – part of his ‘Messiah Complex’ world tour – he declared: “I’m currently single”, before going on to kiss a number of fans seated in the front row.

The news of the split comes as a surprise as the ‘Arthur’ star – who is notorious for his womanising ways – recently admitted he was “eschewing all others” for a new relationship.

Speaking days before he was seen in public with Jemima, 39, for the first time, 38-year-old Russell said: “I’m not typically immune to the allure of objectified women, but I am presently beleaguered by a nerdish, whirling dervish, and am eschewing all others.”

However, Jemima – who was previously married to cricketer-turned-politician Imran Khan and was once in a relationship with Hugh Grant – may not be too upset by the break-up as it was recently claimed she didn’t view their romance as serious.

A source said recently: “They do get along great and have a lot in common, but she doesn’t think he’s mature enough for her to consider a serious relationship.

“And until he proves otherwise, she has said she can only see him on a casual basis.”

Since splitting from Katy in December 2011 after 14 months of marriage, Russell has been romantically linked with a string of women including Geri Halliwell, Demi Moore and Isabella Brewster.

London Olympics Helpers Trained in ‘How Not to Be Nervous’