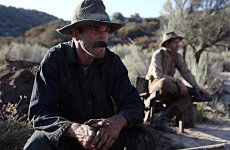 DANIEL DAY-LEWIS, handed the Best Actor Award at the Screen Actors Guild Awards in Hollywood last night for his role in There Will Be Blood, heaped praise on Heath Ledger in his acceptance speech.

“That scene in the trailer at the end of the film is as moving as anything I think I’ve ever seen,” Day-Lewis said of Ledger’s performance in Brokeback Mountain. Day-Lewis also hit out at the media coverage of Ledger’s death, saying: “I think we should leave his family alone.”

In a double-up for British-born actors, Julie Christie won the Best Actress gong for her showing in Away from Her, in which she plays a woman hit by dementia.

Day-Lewis’s tribute was a heartfelt tribute that reflected the shock Ledger’s recent death has had on the acting community. The other major issue at the forefront of many actor’s minds is the on-going writers’ dispute. Most actors support the striking writers and Christie won warm applause when she used her acceptance speech to bang the drum for her creative comrades.

“It’s lovely to receive an award from your own union, especially at a time when we’re being so forcefully reminded how important unions are,” she said.

Both Christie and Day-Lewis won similar awards at the Golden Globes and are now among the hot favourites to clinch the top acting prizes at the Oscars.