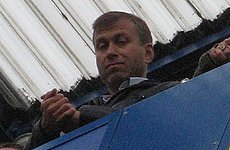 ROMAN ABRAMOVICH, owner of Chelsea FC and once London’s richest man, has won “substantial” libel damages from an Italian newspaper which said he had a gambling problem.

Under the May 2009 headline, “A black year for Abramovich as he loses a yacht at poker”, La Repubblica reported that the multi-billionaire lost so much at one game of cards that he had to give away his £450,000 to pay off the debt.

The article went on to claim that Abramovich’s partner, Dasha Zhukova, had become so concerned she that gave the Blues chief a “poker or me” ultimatum and that he had since taken up online gambling.

But the paper has today admitted the whole story was mistaken and now “offers its sincere apologies to Mr Abramovich for the distress and embarrassment this article has caused”.

On top of the apologies, La Repubblica has also paid an undisclosed amount of cash to the Chelsea owner, which he plans to donate to charity. Gamblers Anonymous need not apply, presumably.

Judi Dench Voted the ‘Greatest Stage Actor of All Time’

‘Bigger and Better’ Simcha on the Square for Sunday