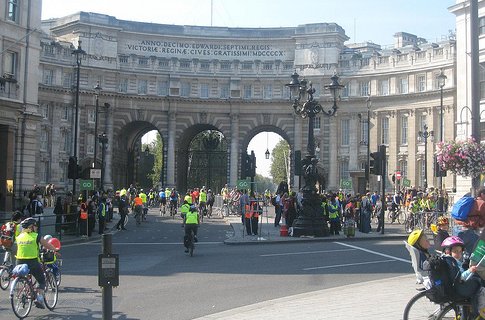 CYCLISTS taking part in RideLondon this August will end their races and journeys under Admiralty Arch, organisers have announced.

The dramatic finish that involves getting over 50,000 pedalers through the famous arch is the icing on the cake of an event that follows the 2012 Olympic route through the Surrey Hills.

It was one of the details of RideLondon revealed at today’s launch attended by London Mayor Boris Johnson.

Around 75,000 cyclists are set to take part in RideLondon, with at least 50,000 already signed up for the ride along the 100-mile Olympic route which takes place on Sunday, 4 August.

As well as the long-distance mass cycle event – known as Ride-London-Surrey 100 – RideLondon also features a much shorter, eight-mile, route through central London on Saturday 3 August and an elite event for the world’s top road racing teams the day after.

“I am delighted that six months on from Laura Trott’s breathtaking gold in the Omnium we are in a position to announce the routes and title sponsor,” said Johnson.

“Prudential RideLondon is sure to become one of the world’s top cycling events. The countdown to the start of the event begins now.”

London Fashion Week kicks off with Tom Ford and 57 other...