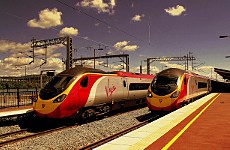 SIR RICHARD BRANSON has hit out at the Government’s decision to strip his Virgin Trains company of the West Coast rail franchise.

The Department for Transport has instead selected a higher bid of £5.5bn from transport rival FirstGroup which includes a pledge to increase the number or services and routes on the West Coast network. The new franchise will run for fourteen years from December 2012.

The West Coast network connects London with the north west of England and Scotland, serving four of the UK’s largest regional cities; Birmingham, Manchester, Liverpool and Glasgow. Virgin Rail Group, which is 51pc owned by Sir Richard and 49pc by Stagecoach has operated the routes since the mid-90s.

Referring to previous unworkable high bids on the East Coast Line, both of which led to financial trouble for GNER and National Express, Branson called for the decseion to be subject to a judicial review.

“This is the fourth time that we have been out-bid in a rail tender. On the past three occasions, the winning operator has come nowhere close to delivering their promised plans and revenue, and has let the public and country down dramatically” said Branson in a statement released this morning.

“In the case of the East Coast Main line, both winners – GNER and National Express – over promised in order to win the franchise and spectacularly ran into financial difficulties in trying to deliver their plans. The East Coast is still in Government ownership and its service is outdated and underinvested, costing passengers and the country dearly as a result.”

“Insanity is doing the same thing over and over again and expecting different results. When will the Department for Transport learn?”.

On its website First Group outlined the pledges that it believes have helped to wrench the prized contract from Branson:

– Transforming the on-board environment with a major refurbishment of Pendolino and Voyager interiors with new seats throughout and improved luggage space
– Introducing 11 new 125mph six-car electric trains for Birmingham – Scotland services which will create 12,000 additional seats per day. This is on top of the 28,000 new seats that will be provided by the additional 106 Pendolino carriages that are coming into service in time for the start of the new franchise. This means there will be 40,000 extra seats by 2016, compared with 2011
– Improved journey time of 15 minutes for trains between London and Glasgow
– Introducing new direct services from London to Blackpool, Telford, Shrewsbury and Bolton providing a new direct link to the capital for more than 500,000 people
– Doubling frequency of London to Preston services, and adding more capacity to Chester and North Wales
– Improving connectivity with more stops at Nuneaton and Milton Keynes
– Reliability and punctuality improvements to improve Public Performance Measure (PPM) to over 90% (from current level of 85.9%) through targeted investment and a new Alliance with Network Rail.