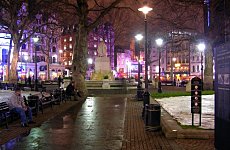 TOM HANKS was there last night, William Shakespeare is there all the time and a quarter of a million normal people turn up on Leicester Square, one of the focal points of the city, every day.

From 2010, Shakespeare’s statue will have a better view thanks to a near UKP20 million revamp, encompassing more grass, more seating, more lights and a new theatre ticket booth.

“This is an area for the people, and we want visitors to be able to relax and enjoy the sites and the array of dining and entertainment on offer,” said Sir Simon Milton, leader of Westminster City Council.

On offer last night was the entertaining, if bizarre, sight of Hanks waving an Aston Villa scarf, explaining that he “likes the team”, while apparently publicising Charlie Wilson’s War, a film about sneaky US dealings in the Soviet-Afghan War. 50p to anyone who can spot the connection.