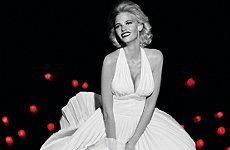 SUPERMODEL LARA STONE has turned into Marilyn Monroe for the launch of the build-up to Red Nose Day, the comedy charity event that this year takes place on 18 March.

“I had so much fun being Marilyn Monroe for the day and recreating such an iconic shot with a Red Nose twist,” said Stone.

Stone’s Monroe-act is an example to us all to “do something funny for money”, as this year’s Red Nose slogan goes.

“Let me give you the three steps to Red Nose Day 2011,” said Film 2011 host Claudia Winkleman, one of the main presenters on the night itself.

“Have a laugh, raise some money and change lives for the better. It really couldn’t be simpler.”

Among the celebrity “funny for money” stunts are: The Inbetweeners Rude Road Trip, where the pair from the hit comedy visit 52 rude places in just 50 hours; an 80s super group featuring Toyah Wilcox, Clare Grogan and Limahl and loads of sketches from the likes of Harry Hill and Miranda Hart.

Last year, Londoners raised £9.8M for Red Nose Day and this year it is odds on that the £10M barrier will be broken.

Red Noses are available from Sainsbury’s and Oxfam shops from today. To get involved in Red Nose Day, head for the official site.