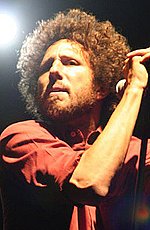 RAGE AGAINST THE MACHINE have confirmed they are to play a free gig in the UK – probably in London – in 2010 as a thank you to fans who made Killing in the Name Britain’s Christmas No.1.

The single was part of a campaign to put one over on the X Factor, whose fans hoped the talent show winner’s Joe McElderry song The Climb would take the top chart spot.

“As promised we will play a free concert in the UK in celebration of this incredible upset victory over the heavily favoured X Factor single,” said RATM’s Tom Morello.

One possibility for the gig’s venue is thought to be Hyde Park, scene of both major open-air rock concerts and huge political protest meetings over the years.