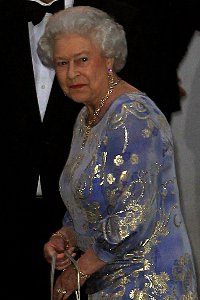 THE QUEEN was joined by Camilla, Duchess of Cornwall and the Duchess of Cambridge aka Kate Middleton on a tour around Fortnum & Mason today (01.03.12).

The royal trio met military personnel involved in the Gifts For Troops scheme, which sends packages to soldiers serving in Afghanistan, and saw a display of tea and biscuits similar to those which will be sent to troops deployed overseas on operations during the Diamond Jubilee weekend, which takes place in June.

During their visit – which is to commemorate the regeneration of the local Piccadilly area – the royal women attended a tea party at the store for around 150 staff, suppliers and former employees, including some who worked there at the time of the queen’s coronation in 1952.

Catherine was also presented with some dog biscuits for her and Prince William’s pet pooch Lupo.