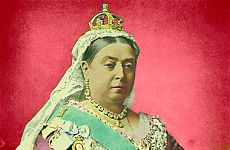 THE QUEEN goes into the record books today as the oldest monarch ever to reign on the British throne.

Now aged 81 years and 244 days, Queen Elizabeth II is due to overtake her great, great grandmother Queen Victoria at 5 o’clock this evening.

There are no plans to celebrate the milestone. Perhaps Her Majesty doesn’t want reminding of her age, or perhaps she has her sights set on Victoria’s other record, that of the longest reigning monarch. If so, she’ll need to hang on until 2015.

Meanwhile, the Queen has sparked health concerns after sporting a large bruise on the side of her neck. She showed off the huge yellow and green mark – which went from just underneath her hairline round to the back of her neck – when she met King George Tupou V of Tonga at Buckingham Palace on Wednesday (18.12.07).

A spokesman for the royal family dismissed the injury, saying: “She’s got a slight bruise. She just knocked it. It’s nothing to worry about.”

The royal refused to let her wound put her off from her duties, and even handed out presents to 700 members of staff in the palace. One member of staff said: “She looked fit as a fiddle!”

Kate Moss: Being ‘Beautiful Inside’ is What Counts