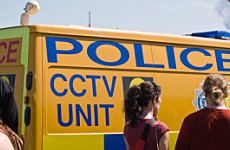 POLICE tactics will be watched closely at the protests against the east London Arms Fair today – Europe’s biggest – following recent criticism over the injuries and death that occurred at an anti-G20 demo earlier this year.

“We would urge [protest] groups to work with us so that we can proportionately police peaceful protest and minimise disruption to local people,” said a spokesperson for the Met.

However, protesters have refused to liaise with Scotland Yard ahead of this week’s Defence Systems and Equipment International event, provoking fears of trouble.

There is “still not proportionate policing” said Sophie Williams of the Disarm DSEI group.

The probe into Ian Tomlinson’s death after being beaten by police at the April demo in the City is still gojng on, but it is felt by some that there has already been a change in the way police manage protests.

Last week at the Climate Camp demos, there was little sign of the ‘kettling’ technique where protesters are blocked in for hours at a time and which is partly blamed for Tomlinson’s demise.

There are rumours that at the last DSEI show, in 2007, military personnel were used in conjunction with the police to protect a trade fair that is worth millions in arms deals.

“Huge profits will be made by arms companies, but the costs are borne by the UK taxpayer, and millions of people whose lives are blighted by the arms trade,” said Sarah Waldron of the Campaign Against the Arms Trade.

Battle Plans Drawn for the War of Heathrow

Queen to visit Woolwich Barracks in the wake of the murder...