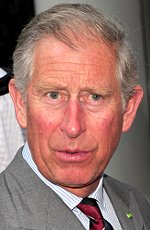 “I am finding it very hard, ladies and gentlemen, to live with myself after I discovered that somebody has suggested I might even be an icon of fashion,” joked the Prince of Wales in his speech to the smartly-turned out throng.

Charles, who wore a navy number by Savile Row tailors Anderson & Sheppard to the event, was recently named one of the most fashionable men in the world by GQ magazine, but the heir to the throne believes his new-found trendy status can be easily explained.