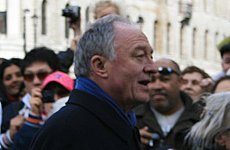 KEN LIVINGSTONE is ahead of rival Boris Johnson in the race to win 1 May’s London mayor election, according to the latest poll.

The survey by Ipsos Mori ranked current Mayor Livingstone on 41 percent with Johnson a whisker behind on 40 percent. Taking second preferences into account, Labour candidate Livingstone came in at 51 percent, two points in front of his Tory opponent.

Together with last night’s TV debate in which Johnson was made to look foolish over his apparently uncosted plans for London’s buses, the new poll has cheered the Livingstone camp.

“We believe the ground has shifted towards us in the last week,” said a spokesperson for the Mayor’s campaign.

Third placed Brian Paddick’s score of 14 percent in the Ipsos Mori poll is small, but it might be significant, as it represents a four point jump on other surveys and it could be that the Liberal Democrat’s gain explains Johnson’s loss.

Paddick was also judged by many to have won the BBC Newsnight debate, with both his rivals coming unstuck under the severe questioning style of host Jeremy Paxman; Johnson when he repeatedly failed to do his sums on plans for new buses and Livingstone when he blustered through questions on why he over-rode west London opinion on extending the Congestion Charge.

The dominant issue in the debate was crime, which Johnson has pushed as his main theme of the campaign. But here his opponents were able to neutralise Tory advantage, with Livingstone pointing to the sharp drop in the London murder rate in recent years and former Met Commander Paddick playing his ex-copper card.