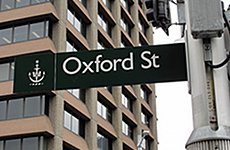 BOOTS the chemists’ flagship store on Oxford Street is the target this weekend for the latest anti-cuts demo, with campaigners out to highlight corporate tax avoidance.

Organisers UK Uncut have chosen Sunday for the event as it’s the day before self-assessment tax forms are due to be returned to the government.

“Whilst we rush to complete our forms, rich corporations and individuals are getting away with shirking £25 billion of tax every year,” said Dannie Wright, of UK Uncut.

“In 2008, Boots moved their headquarters to Switzerland. This has allowed them to retain roughly £150M per year which could be used to fund the health service.”

UK Uncut activists plan to arrive at the Oxford Street store kitted out as doctors and nurses in order to “bring the health service cuts to Boots” as they put it.

Similar corporate tax-avoidance events are going ahead in towns and cities across Britain, also on Sunday. The Boots demo is scheduled to start at 1.00pm.

Heather Mills: ‘I Get Nothing But Support from the Street’