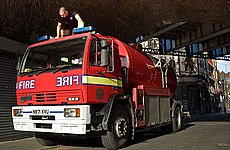 THE LONDON Fire Brigade says it “can keep London just as safe” despite new plans to make £2M worth of cuts to the service.

“We can keep London just as safe, but at less cost.”

Coleman aims to slash the brigade’s hefty overtime bill, but firefighters say overtime costs are simply a reflection of the 139 unfilled posts at the LFB.

“It’s not firefighters or their union who want overtime; it’s the London Fire Brigade, to mask the fact that they are about 150 firefighters understrength,” Ian Lehai, a Fire Brigade Union official in London, told The Guardian.

“The brigade is using overtime to mask shortages.”

Meanwhile, the LFB is also under attack for handing its fleet of fire engines to troubled company AssetCo, the outfit that supplied back-up transport during last year’s strike.

“The safety of Londoners, and of London’s firefighters, is in the hands of a company which could be wound up because of tax debts,” said Matt Wrack, FBU leader.

“At the least, this will mean that there is no one to maintain London’s fire engines. At the worst, it could mean that London forfeits its fire engines to pay AssetCo’s debts.”

AssetCo is due in court on 20 April on a winding up petition from the tax man.

BoJo to Back London’s Culture through ‘Tough Times’